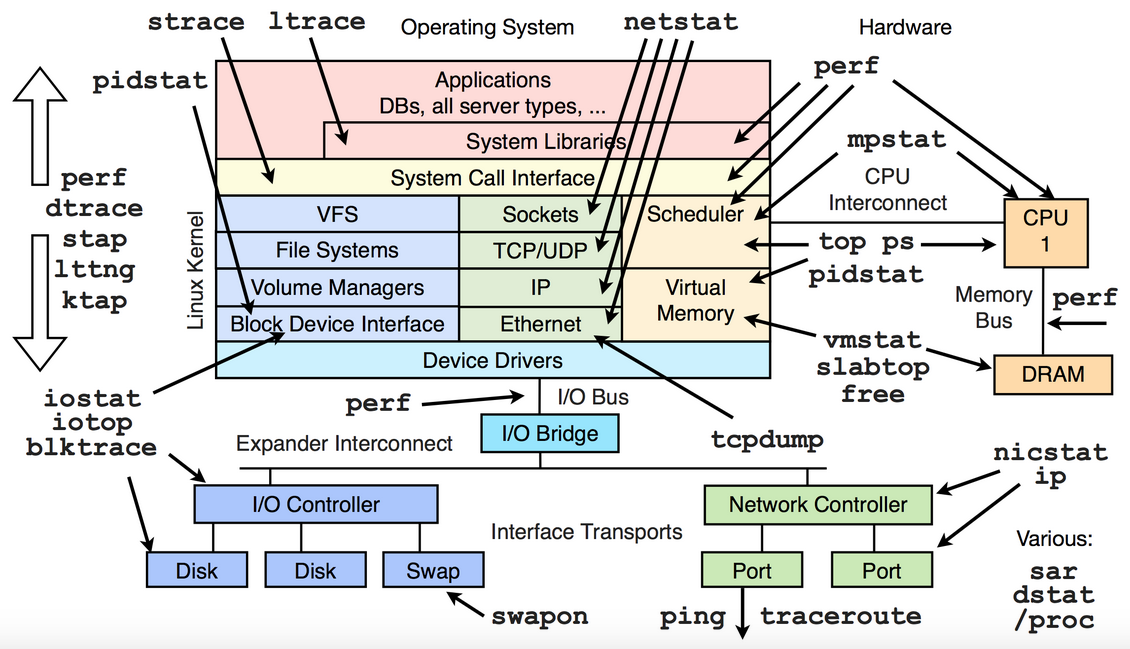 By: Nitin J Mutkawoa
In: Linux System
With: 1 Comment

Limitations and Solutions with blktrace

There are several limitations and solutions when using blktrace. We will focus mainly on its goal and how the blktrace tool can help us in our day to day task. Assuming that you want to debug any IO related issue, the first command will be probably an iostat. These utilities can be installed through a yum install sysstat blktrace. For example:

The limitation here with iostat is that it does not gave us which process is utilising which IO.  To resolve this issue, we can use another utility such as iotop. Here is an example of the iotop output.

Here iotop shows us exactly which process is consuming ‘which’ and ‘how’ much IO. But another problem with that solution is that it does not give detailed information. So, blktrace comes handy as it gives layer-wise information. How it does that? It sees what is going on exactly inside block I/O layer. When used correctly, it’s possible to generate events for all I/O request and monitor it from where it is evolving. Though it extracts data from the kernel, it is not an analysis tool and the interpretation of the data need to be carried out by you. However, you can feed the data to btt or blkparse to get the analysis done.

Before looking at blktrace, let’s check out the I/O architecture. Basically, at the userspace the user will write and read data. This is what the User Process at the user space. The user do not write directly to the disk. They first write to the VFS Page Cache and from which there are various I/O Scheduler and the Device Driver will interact with the disk to write the data.

The blktrace will normally capture events during the process. Here is a cheat sheet to understand blktrace event capture.

blkparse will parse and format events acquired from blktrace. If you do not want to run blkparse, btrace is a shortcut to generate data out of blktrace and blkparse. Finally we have btt which will analyze data from blktrace and generate time deltas for each layer.

Another tool to grasp before moving on with blktrace is debugfs which is a simple-to-use RAM-based file system specially designed for debugging purposes. It exists as a simple way for kernel developers to make information available to user space. Unlike /proc, which is only meant for information about a process, or sysfs, which has strict one-value-per-file rules, debugfs has no rules at all. Developers can put any information they want there. – lwn.

So the first thing to do is to mount the debugfs file system using the following command:

The aim is to allow a kernel developer to make information available in user space. The output of the command below describe how to mount and verify same. You can use the command mount to test if same has been successful. Now that you have the debug file system, you can capture the events.

Diving into the commands

1.So you can use blktrace to trace out the I/O on the machine.

2. At the same time, on another console launch the following command to generate some I/O for testing purpose.

From the blktrace console you will get an output which will end up as follows :

3. Same result can also be achieved using the btrace command. Apply the same principle as in part 2 once the command has been launched.

4. In part 1, 2 and 4 the blktrace commands were launched in such a way that it will run forever – without exiting. In this particular example,  I will output the file name for analysis. Assume that you want to run the blktrace for 30 seconds, the command will be as follows:

5. On another console, launch the following command:

6. Wait for 30 seconds to allow step 4 to be completed. I got the following results just after:

7. You will notice at the directory /mnt  the file will be created. To read it use the command blkparse.

8. Now let’s see a simple extract from the blkparse command:

The first column shows the device major,minor tuple, the second column gives information about the CPU and it goes on with the sequence, the timestamps, PID of the process issuing the IO process. The 6th column shows the event type, e.g. ‘Q’ means IO handled by request queue code. Please refer to above diagram for more info. The 7th column is R for Read, W for Write, D for block, B for Barrier operation and finally the last one is the block number and a following + number is the number of blocks requested. The final field between the [ ] brackets is the process name of the process issuing the request. In our case, I am running the command dd.

9.The output can be also analyzed using btt command. You will get almost the same information.

Some interesting information here is D2C means the amount of time the IO has been spending into the device whilst Q2C means the total time take as there might be different IO concurrent.

The Seekwatcher program generates graphs from blktrace runs to help visualize IO patterns and performance. It can plot multiple blktrace runs together, making it easy to compare the differences between different benchmark runs. You should install the seekwatcher package if you need to visualize detailed information about IO patterns.

The command to be used to generate a picture to for analysis is as follows where seek.png is the output of the png name given. 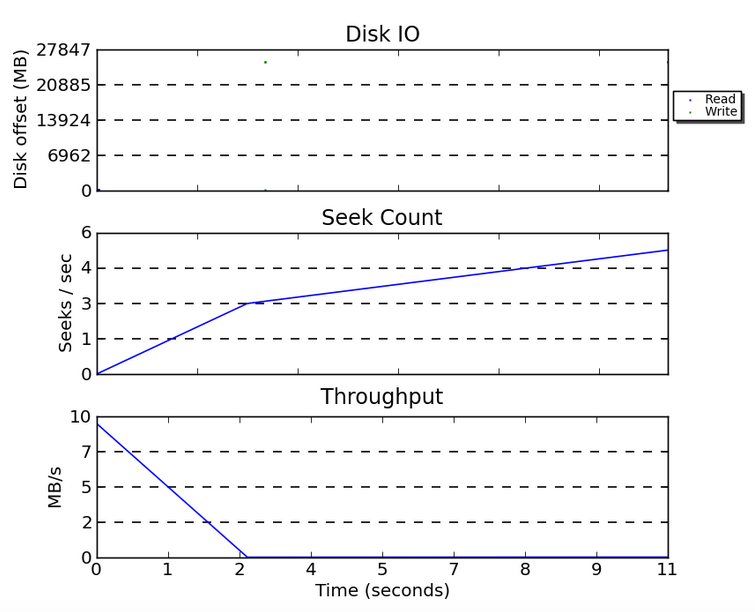 What is also interesting is that you can create a movie-like with seekwatch to view the graph.